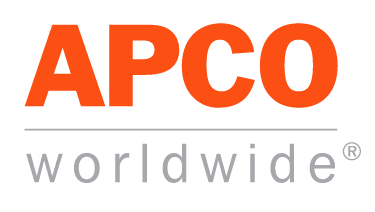 APCO Worldwide is an independent global public affairs and strategic communications consultancy. For over 30 years and with more than 650 employees representing more than 40 nationalities, it has used its campaign instincts to help the most innovative organizations create game-changing possibilities and solve complex problems. Its mission is to enable clients to achieve their objectives through insightful counsel, authentic advocacy and creative communications. With more than 35 worldwide locations, it is also the second largest independently owned PR firm in the United States. Headquartered in Washington, D.C., APCO was founded in 1984 by Margery Kraus, who is now the firm’s Executive Chairman.

GE Aviation is a world-leading provider of commercial, military and business and general aviation jet and turboprop engines and components as well as avionics, electrical power and mechanical systems for aircraft. GE has a global service network to support these offerings. GE and its customers are also working together to unlock new opportunities to grow and deliver more productivity beyond traditional services. GE Aviation is becoming a digital industrial business with its ability to harness large streams of data that are providing incredible insights and in turn, real operational value for customers.

Founded in 1926, McKinsey & Company is a global management-consulting firm, committed to helping institutions in the private, public, and social sectors achieve substantial and lasting improvements in their performance. With consultants in more than 60 countries, it helps clients shape direction, mobilize their organizations, build capabilities, and support execution for sustainable results.

Its commitment to research and knowledge creation supports this objective. It publishes its insights and those of external experts to help advance the practice of management and to provide leaders with facts on which to base business and policy decisions. McKinsey spans countries and industries to examine everything from leadership and corporate strategy to globalization, urbanization, and technology’s impact on business and society.

Schindler was founded in 1874 in Lucerne, Switzerland, and is one of the world’s leading providers of elevators, escalators, and moving walks, as well as maintenance and modernization services. The Group has over 1,000 branch offices in more than 100 countries, as well as production sites and research and development facilities in the US, Brazil, Europe, China, and India.

Schindler manufactures, installs, services and modernizes elevators, escalators and moving walks for almost every type of building requirement worldwide. The company specializes in the latest-technology engineering, as well as mechanical and microprocessor technology products designed and rigorously tested for safety, comfort, efficiency and reliability. Inspired by the vision of being the best service provider in the industry for its customers, Schindler will continue in the future to develop highly innovative and user-friendly mobility solutions and to deliver these to the world market.

Shanghai Hippo Culture & Technology Corp., LTD is located in Zhangjiang High-tech Park，Pudong，Shanghai. It offers a collection of digital content design and development service, including games, exhibition contents and industrial application with films, TV, VR(Virtual Reality), MR(Mix Reality) and multimedia interactive products. Since 2006, it has been the first original 3D animation movie company in China, and also has been identified as the Key National Animation Company and the sixth group of National Cultural Industry Base.

Walmart Stores, Inc. was founded by American retail legend Mr. Sam Walton in Arkansas in 1962. Over the past 50 years, the company has become the world’s largest private employer and retailer. Each week, more than 250 million customers and members visit its nearly 11,500 stores in 28 countries and e-commerce websites in 11 countries. Walmart continues to be a retail leader through innovative thinking, leadership through service, and above all, a commitment to saving people money so they can live better.

In 1996, Walmart entered the Chinese market and opened its first hypermarket and Sam’s Club in Shenzhen. By now, Walmart has been operating in China for 20 years with about 100,000 associates. Up to 31 Dec, 2016, Walmart has been operating 439 retail units covering 189 cities nationwide; as well as 8 distribution centers and 11 fresh products distribution centers. Walmart China partners with more than seven thousands of of suppliers in China to locally source 95% of its merchandise. All China stores are managed by local Chinese. Walmart hopes to become an integral part of China’s economic development, creating jobs and economic stimulus and working hard to build on a position as a trusted corporate citizen in China.

Founded in 2012, UBTECH is a global leading AI and humanoid robotic company. Since 2008, UBTECH has successfully developed consumer humanoid robots, robots for business use and Jimu robot after breakthroughs made in digital servos, the core part of humanoid robots. In 2016, UBTECH Robotics has surpassed 1 billion valuation and became a unicorn startup company.

It offers Alpha 1 Pro, a humanoid robot for entertainment and education, Jimu Robot, an interactive robotic building block system that lets kids build robots, Cruzr, a cloud-based intelligent humanoid robot that provides service applications for industries and domestic environments, and Lynx, a robot with Amazon Alexa feautures. UBTech serves customers through dealers in Germany, the United States, India, Norway, France, Italy, and other countries. Jian Zhou founded UBTech in 2012, with its headquarters in Shenzhen in China and an additional office in Los Angeles in California.

Xiaomi Corporation is a Chinese electronics company headquartered in Beijing. It was founded in 2010 by serial entrepreneur Lei Jun, who believes that high-quality technology doesn’t need to cost a fortune. Xiaomi makes and invests in smartphones, mobile apps, laptops, and related consumer electronics. Its product range currently includes the Mi Note Pro, Mi Note, Mi 4, Redmi 2, Mi TV, Mi Band and other accessories. With more than 61 million handsets sold in 2014, and products launched in Taiwan, Hong Kong, Singapore, Malaysia, Philippines, India, Indonesia and Brazil, Xiaomi is expanding its footprint across the world to become a global brand. At the start of Q2 of 2018, Xiaomi was the world’s fourth-largest smartphone manufacturer, leading in both the largest market, China, and the second-largest market, India.